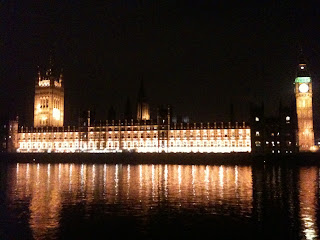 Nice solid start to the week on Monday (10th Jan) with a run after work to the broadgate virgin gym. I work near St Pauls and my usual after work jog starts at the bottom of the famed wobbly bridge on the northside of the . From there I run along the embankment (the finish for the Virgin London Marathon!) to Big Ben. I cross the river to the south side and jog up to the MI5 building by Vauxhall. A quick 180 degrees and run back with magnificent views of the houses of parliament – all lit up during the winter (see pics! - from iphone so a bit fuzzy). Continuing along the south side of the river past the Eye, Royal Festival Hall and the Tate modern until I get to bridge. Despite it being wet and cold this part of the run is a joy in the winter as in the summer months it is teeming with tourists. Up and over the bridge and then through the back streets to Liverpool street – either home or to the gym for a total distance of around 12km
On Monday it was supposed to be a slow gentle run as still getting back into my stride. However some fool decided to overtake me on the embankment so had little choice but surge past him and put clear pavement between us. Good for a bit of speed training but in the past have injured myself by racing too early in my training. Luckily I managed to slow down for the second half of the run. Bizarrly the first month of training the hardest thing is trying not to run too fast or too hard - in previous years have picked up injuries from being over eager. Popped into the gym to stretch and do some weights – shoulders the main focus (despite the focus on running still need to keep the beach muscles in shape!) 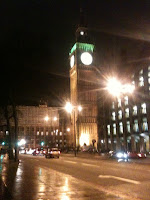 Tuesday was a rest day then Wednesday usual workout with my trainer at slim jims near Liverpool street– strong workout for the legs - more details ton the full program to follow in a future post.  Thursday was a late finish at work so did the usual run home (no-one to race so a nice steady pace ~ 4.30min / km!) and to bed.


Has been a quiet January with little midweek partying – v helpful! Hopefully a quick run on the treadmill Friday and a decent long run at the weekend.
Posted by Mike at 06:12