Boom – the tiger blood started pumping this week! Post the weeks skiing it took a few days to get back into exercising without big planks strapped to my foot but by the end of the week we were flying. And the secret weapon? Off the booze for the week and lots of shut eye. Obviously my training is coming to a peak and the weeks ‘rest’ while on the slopes has left me rejuvenated but is amazing how fresh I feel after a week with no alcohol. The only thing I’m addicted to now is winning.
On Friday I was an F-18 bro, but on a treadmill! I deployed my ordinance as I hammered a sprint session – 3 mins at full tilt and 2 mins rest for 40 mins with a warm up before and after. Hit a top speed of 20.5 on the treadmill (that’s 20.5 kmh – or 3 min per km for those of you without a warlock brain.) which is impressive although sadly that’s roughly the pace that the marathon world record was run in.
At the weekend I was at home with the aged rels for a pre-emptive birthday celebration. As a special treat the whole family had entered a 15mile race in Banbury on Sunday (I’m spoilt aren’t I…). The race started off tough but I managed to tailgate someone for the majority of the course. We made steady work overtaking people from about half way onwards – he dropped me on a big hill three miles from the end. Despite only having one gear, one speed, go, I managed to pick up the pace and steamed past him and with the wind in my sails (or the afterburners enagaged on the old F-18)  had a storming final 3km picking up a few more places including beating the first lady – winning, duh! Jogged back along the course to add a few more KM to my overall total and to see in aged rels, their running buddy Vicki and my little sis. Gnarly day had by all! 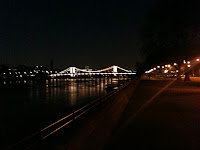 Overall for the week a nice tidy 86km including a nice run out along the river to Battersea park – pic of Battersea bridge included. Also managed my usual hour long gym session with Ian where I worked out like a rock god from mars. Week ahead scattered with plans to celebrate my birthday but aiming to clock a respectable 60km – after that it’s the easy bit – tapering! Exercise less, sleep more, eat well. Can’t wait.
P.S. If you didn’t get the topical quotes in this weeks entry then congratulate yourself that you don’t waste your time reading vacuous quotes by overhyped celebrities. If you want to catch up with the rest of the world check out the following link, or just google Mr Sheen and see what turns up. Winning, duh!
http://www.brainyquote.com/quotes/authors/c/charlie_sheen.html
Week 11 Total
Week 11 Km Ran   86km  (80km Target)
Week 12 Target      60km
Posted by Mike at 10:19