Week 6 cont: Off to the Olympics

Well it had been a sobering week training wise with sore muscles and the lack of motivation. On Sunday I finally hauled myself off the couch and set off on my long run hoping to shake myself out of my slumber and stagger round a solid 25k to rescue the week.
There’s something about a long run which is very relaxing. Nothing to rush back for, no pressure to put in a fast session, just the opportunity to get out and enjoy some daylight for once. I plugged in my iPod, laced up my brooks shoes and headed off. My mind wandered and before I knew it I was 10km in and down by Limehouse basin. Heartened I picked up the pace – the fresh smell in the air from the previous nights rain encouraging me on. 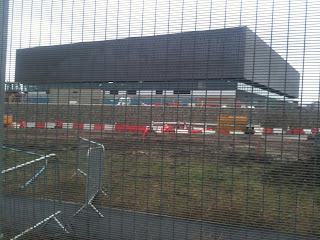 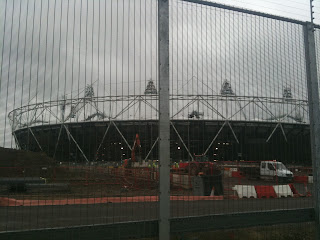 I stopped briefly at the Olympic sight to take a few pictures of the development – two showing the brand spanking new buildings and one of the opposite side of the canal to prove that it is still in deepest, dankest east – I wonder what will become of the graffiti over the next year. Perhaps Banksy will be commissioned to give the place an acceptably edgy feel. (There’s one of his pieces further down the canal nearer Bethnal green already) 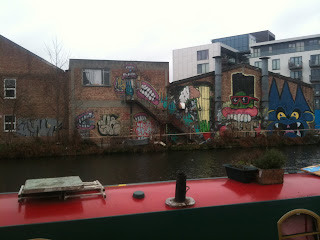 Onwards I trotted, past my turn off home which would result in a 20km run, heading further up the canal to add on a couple of extra clicks before retracing my steps. As I continued I felt a burst of energy, my pace picked up, I felt fresh and alive. Head up I was invincible – faster and faster I ran and further and further – I felt I could run forever. I changed my targets – deciding that after such a miserable week and feeling so good I could easily do 30km. After making light work of the extra 5km I turned round. And almost came to a standstill. No wonder I’d felt so good as I felt the power of the wind, now firmly in my face, that had been propelling me on. Cursing being so optimistic and naïve (no way could I have felt that good) I kept me head down and hit out for home. Needless to say the next 5km were a struggle but managed to get back to the turn, across a field, over the north circular and into park. I managed a decently paced ten minutes through the park and then trotted back to Brick lane for a couple of delicious freshly baked beigels from the world famous beigel shop. Yummy. Home, shower and stretch and a very satisfying 30km completed.
Let’s hope everything’s back on track for the next week. Happy Valentines day one and all.
KM Ran
Week 6 total 66km  (plan 70km)
Week 7 Plan 70km
Posted by Mike at 08:54